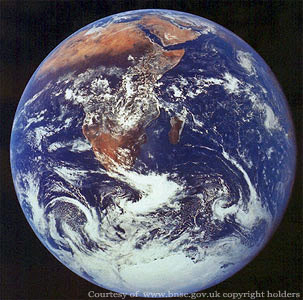 Did you know the first Greek God was actually a Goddess?. he is Gaia, or Mother Earth, who created herself out of primordial chaos. From her fertile womb all life sprang, and unto Mother Earth all living things must return after their allotted span of life is over. Gaia, as Mother Nature, personifies the entire ecosystem of Planet Earth.
Mother Nature is always working to achieve and maintain harmony, wholeness and balance within the environment. Mother Nature heals, nurtures and supports all life on this planet, and ultimately all life and health depend on Her. In time, Nature heals all ills.
The way of Mother Gaia is the passive, feminine, Yin way of healing. All we need to do to regain our health is to return to the bosom of Mother Nature and live in accordance with Her laws.
The Gaia archetype underlies all notions of the Nature Cure. Mother Nature is a healing goddess for the ancients whose glory was celebrated each spring, long before organized religion came into play. 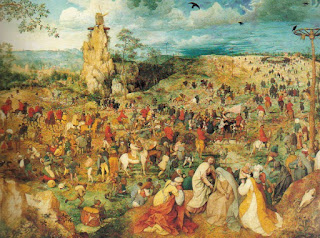 Easter, the name: According to the Encyclopaedia Britannica, "the 8th century derived it from that of the Anglo-Saxon spring goddess Eostre, whose name, in turn, might have come from "Eastre," meaning spring. Once again, pagans honor her as the "goddess of dawn," one of many fertility goddesses celebrated during their spring equinox.
Christ Carrying the Cross puts history's most amazing event into a context as relevant to contemporary America as it was to the Flemish masses back in the 16th Century. In this miniature version of Pieter Bruegel's massive painting, Jesus (in the center) is barely visible. That's part of Bruegel's message. For the crowds in the picture were as oblivious to the suffering Savior in their midst as the average person on a city street might be today. Much like today their minds were on their games, on their petty arguments, on their mischievous children, on the stately guards and, especially, on the spectacle of the execution ahead. The identities of the accused mattered little. They never recognized the King who gave His life for them.

"Eostre, a Germanic Goddess, is associated with both spring and sunrise. Tradition has it that Eostre, saved a bird whose wings were frozen from the harsh winter by turning it into a magickal, egg laying hare. Eostre was a maiden whose aspects of renewal and rebirth brought about the reappearance of bright spring flowers, baby chickens fresh from the shell, baby bunnies from their winter dens and the reoccurrence of the plow in the field. In some European traditions flowers grew from her footprints.

"Pagans lit new fires at dawn to cure ills, renew life and protect the new crops. In some cultures this sacred day included the ringing of bells, singing of songs, and decorating of hard boiled eggs. Eggs were a symbol of both the sun god (the golden yolk) and fertility (the white shell symbolizing the White Goddess) and were used both as talismans and eaten in ritual. The eggs of wild birds were gathered and these eggs are recreated today with the dyes used in Easter celebrations. The weaving of Easter baskets harks back to the weaving of birds' nests, a necessity prior to egg laying and the continuation of the life cycle."
In the 1960's, James Lovelock formulated the Gaia hypothesis. It states that all life, and all living things on this planet, are part of a single, all-encompassing global entity or consciousness which he named Gaia. It is this global consciousness, Mother Gaia, that makes our planet capable of supporting life, while our near neighbors in the solar system are barren and lifeless.
Through the global consciousness of Mother Gaia, all living things on this planet, from their most primordial instincts, are constantly interacting with their environment to ensure the harmony, balance and continuity of Life.
Live in balance with Mother Nature and health and healing are yours; violate Her laws and get out of balance, and you pay the price in suffering and disease. In this sense, all medicine and healing can be seen as a system of ecology. Let us use the celebration of EASTER to be an affirmation of our love for our planet!

Popular posts from this blog

By Goodness Welllness Blog Master May 01, 2018
Chicago is home to... 237 square miles of land An estimated 2,695,598 residents Dozens of cultural institutions, historical sites and museums More than 200 theaters Nearly 200 art galleries More than 7,300 restaurants 77 community areas containing more than 100 neighborhoods 26 miles of lakefront 15 miles of bathing beaches 36 annual parades 19 miles of lakefront bicycle paths 552 parks United States President Barack Obama Did you know... Over 50 million people visit Chicago annually. Chicago was incorporated as a city in 1837. Chicago’s nicknames include: The Windy City, the City of Big Shoulders, the Second City, and The City That Works. The "Historic Route 66" begins in Chicago at Grant Park on Adams Street in front of the Art Institute of Chicago. The Chicagoland area contains nearly 10 million people in three states – Illinois, Wisconsin and Indiana – and is the 3rd largest metropolitan area in the United States. Chicago is home to  11 Fortune 5
Post a Comment
Read more

By Goodness Welllness Blog Master February 20, 2018
Even though not as famous globally "Tandoori Chicken",  Dal and Roti are staple foods in every Indian household. And  the good news: it is healthy beyond measure!   Ease your soul with foods like dal that comes with all the goodness of protein rich lentils. Humble and comforting recipe to start your day or night! Dal and Rice or Dal and Roti even, Dal and Buns - eaten everyday to satisfy and satiate more than just hunger pangs, be it breakfast, lunch or dinner the humble lentil has become ubiquitous with Indian cuisine. Each family has their own recipe for the making of the 'dal -curry' and their own favorite main dish - either hot cooked soft white rice, or a fluffy 'chappati" ( a wheat based flat bread) or a hot baked bun! Growing up, mine was no different, and I've carried on the tradition with my own family. I love the ease of  making this simple, rustic dish and eating it  any time, by itself or making it an accompaniment to another dish an
1 comment
Read more